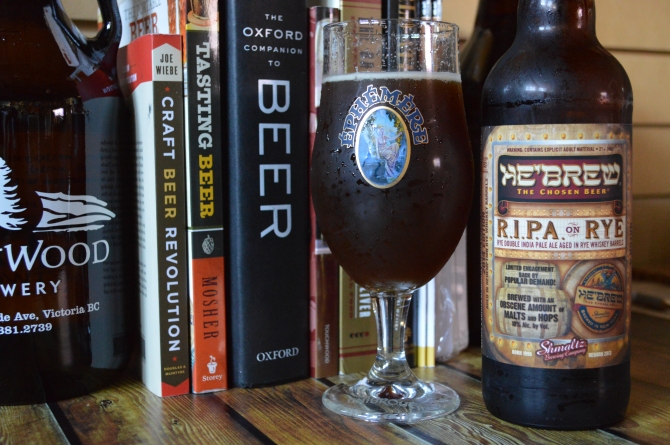 Rye.  Until recently it seemed like the forgotten grain, but now it’s everywhere.  It can be a bit tricky to brew with as it has no husk and can gum up a mash tun like a dried up cement mixer but it’s worth the effort.

One of the first things I need to mention about this beer is the value.  At 10% ABV, a $10 price point would be reasonable, but this was barrel-aged, dry-hopped and is just plain delicious.

This beer has so much going on it’s hard to decided where to begin.  Jam-packed with the big American hops that give it tons of fruitiness, without the pine tar of most American IIPA’s.  But you’ll hardly notice the Warrior, Cascade, Simcoe, Crystal, Chinook, Amarillo and Cascade hops when that massive pack of rye gets in your olfactory.  The rye dominates the malt bill, which dominates this beer over some sour yeast notes.  I can’t honestly ascertain if there are sour yeasts in this because it is so complex but my tongue tells me there are and it certainly would make sense that this beer would grab some wild yeast from the barrels.

Amarillo fruitiness, Miss Vickie’s Salt and Vinegar chips, I’ll state the obvious and say rye bread but not just any rye bread, the heavy dark stuff than can be used to beat someone…you know…a good old fashioned Winnipeg Rye bread that don’t take no shit from no one.  As well, there’s some figs, toffee, toasted sourdough bread crust, and a nose of the sawdust from my father’s bandsaw.